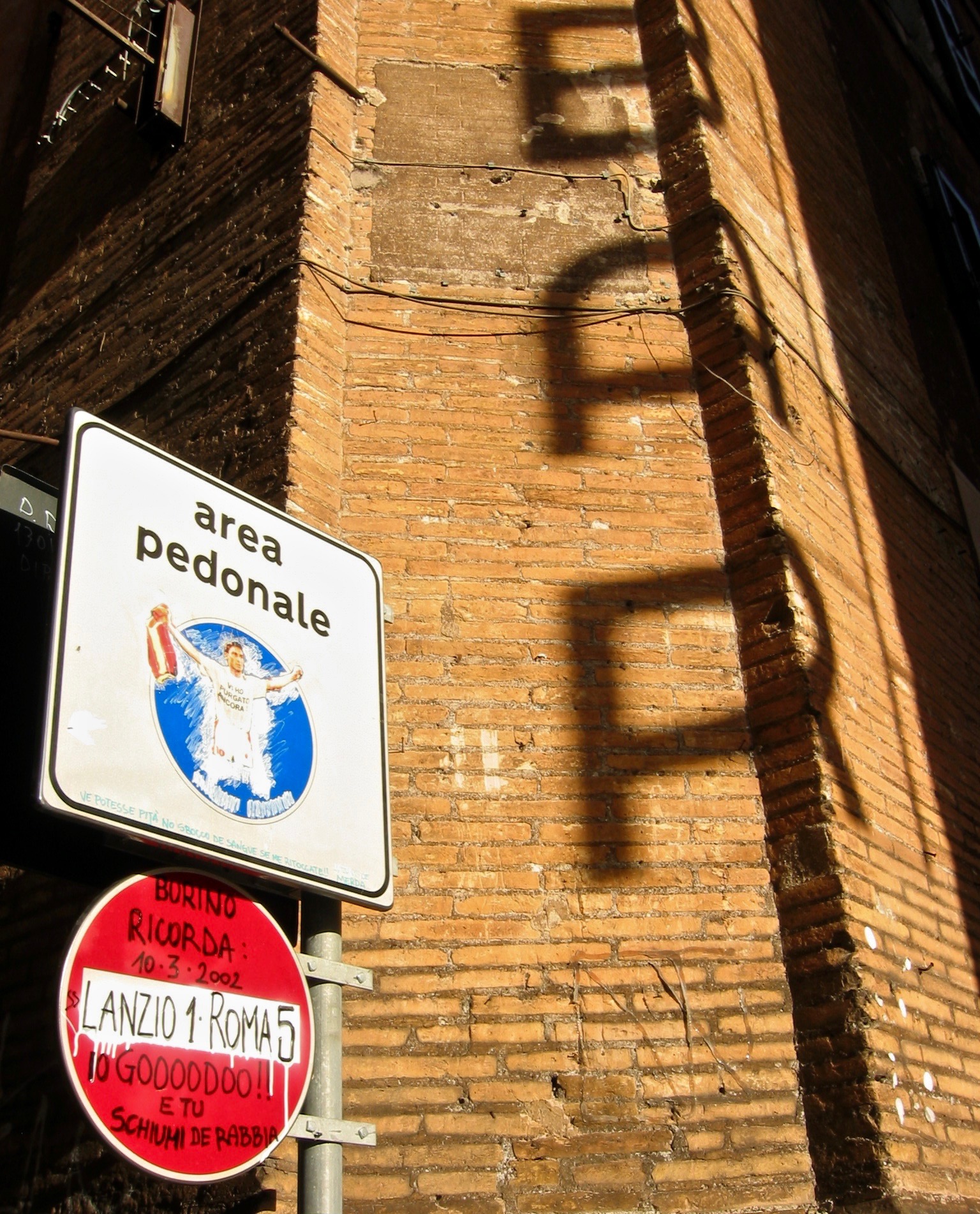 soccer graffiti outside an espresso bar

Allow me to sweep the dust off this blog, so I can quickly post a list of cheap eats in Rome’s Centro Storico. I’ve emailed variants of this guide to traveling friends for a long time now, but somehow never managed to put it on the web.

Two caveats: First, it’s been five years since Az and I lived in Rome; two since our last visit. But if something’s on the list… and you’re still hearing good reviews in present-day – that’s saying something.

Second, we were mostly vegetarian back then, so our dining staples tended towards pasta, contorni, and pizza. Which is not exactly a limiting diet, in Italy…

My favorite lunches in town are both near Piazza Navona: first, there’s Lo Zozzone, which makes awesome sandwiches on hot, straight-from-the-oven pizza bianca that’s sliced to order and stuffed with ingredients of your choosing. The breasola, arugula, and parmesan is particularly popular; I’d generally go the tapenade-veggie-cheese route, and sometimes order a small second of nutella-ricotta for dessert. Best to arrive both hungry and patient, the lunchtime queue can be a bit of a jostle.

Even better is Da Tonino’s, which is officially called Trattoria Antonio Bassetti. I’m not at all sure if it has a sign, yet, and while I know they upgraded the decor when I visited a few years back (interior lighting used to be a couple of raw fluorescents) it’s a humble-looking place. The food isn’t fancy by any measure — it’s the simple pastas that shine here — but the taste of it all is stupendous and superlative. The pasta melanzane (eggplant) and pasta broccoli are my two favorites; in a perfect world their pasta fagiole would be spirited away somewhere safe to serve as the specimen against which all others should aspire. Check out the carciofi and brocolli romano (perfectly saute’ed with chili flakes and olive oil) as side dishes.

As for dinner, well, it’s gotta be Baffetto’s, right up the street. Look, there’s a reason this place is in every single guidebook: Baffeto’s is very, very good and very, very Roman pizza, with a two-dimensionally-thin crust that’s crunchily croccante, baked perilously close to the fire, and topped with a type of grated fresh mozarella that I’m convinced is the key to it all. (Order the Insalata Burina as an appetizer to sample the cheese raw; I’m personally torn between that and a starter bruschetta every time I go.) Be prepared for gruff service and a wait outside, with plenty of tourists and crowd-control all’italiana. It may seem gauche, but arriving early in the evening (like, ten minutes before they open) makes for a wayyy more civil experience. Plus, you’re more likely to get a seat downstairs where you can watch the two cooks work the pizza oven, which I always like. Contingency plan: if Baffeto’s won’t work, and you can’t make it to Trastevere, run with Da Francesco, around the corner at Piazza del Fico.

There’s also Da Alfredo & Ada, which is just down the street from Baffeto’s and Da Tonino. Another sign-less joint, I’d always referred to this place as the Three Sisters, since it’s run by three older women who fuss around each other like siblings. (They’re not.) It’s a tiny restaurant with a humble menu — in fact, don’t even kid yourself about a menu at all, the schtick here is that the ladies will serve you whatever they feel like serving you. Last time we went, I watched Ada scold a group for not eating their veggie sides; she promptly pulled them off their table and gave them to ours. Behave yourself — you’ll get some cookies after dinner if you do. (Check the great post and photos at tasting menu for a second opinion.)

The best coffee in Rome (IMHO) is Caffe San Eustachio. And given that the queue at the bar sometimes goes three deep, it appears others feel the same. Il Gran Caffe is the paragon of espresso shots, though I swear there’s some cheating going on — the crema on top is so wonderfully fluffy that I suspect they’re doing something when they stir in the sugar for you. (A note on that: when the barista barks “zuccherato?”, he’s asking if you want sugar, and the answer is yes.) If you don’t believe me, check the weird metal guard they’ve put in to block the view of exactly what happens under the espresso machine. I know I’m not the only one who thinks something’s going on (a teensy hint of hot cream, or bicarbonate of soda, maybe?), but whatever it is, it’s good.

Also good at San Eustachio is Il Gran Cappuccino, a hefty-in-the-hand cappuccino that’s massive by Italian standards but seems just about right by me. (For more thoughts on dainty Roman cappucini, see my old post here.)

Caffe Tazza D’Oro is nearby, too, and while the decor is sweet and the place is something of a destination, I can’t say the espresso struck me as being notably better than anywhere else (in Rome, that is).

Gelato is the other staple that’s abundant around the Pantheon. Like the Trevi fountain, I think the Pantheon looks better at night, and always worth a minor course-correction when taking an evening stroll. Ditto for a few of the cremerias in the area — there’s La Cremeria right on the piazza, and the venerable Giolitti nearby. Della Palma wins on quantity (but not quality) and is wonderful to look at; it’s an OK place if you’ve got some kids in tow.

Campo Dei Fiori isn’t particularly great for sit-down dining, at least, not if you’re really going to focus on the food. Come night-time, it’s mostly a party nexus for international students, busy drinking exotic Stella Artois and the like. However, there’s a joint called Filetti di Baccala just a bit off of Campo dei Fiori that epitomizes the notion of ‘core competency’. Battered and deep-fried fillets of cod are what’s on offer, here, attentively cooked in massive iron bowls of hot oil. Be sure to order a side of puntarelle if it’s in season; puntarelle is a leaf vegetable related to chicory that I’ve never seen outside of Italy. It’s served cold, curly, and with a oil/salt/vinegar/anchovy dressing that complements the fish perfectly. The little square that this restaurant sits in is quite cute; IIRC there’s a couple tables outside and a little frozen yogurt place next door.

Augusto (map) is a trattoria that’s popular with locals for both lunch and dinner, and as the lone restaurant in a tiny square, it winds up being a lovely place for people-watching. If you’ve been walking the cobblestones all morning, and just want to chill a bit with good food and a quarter liter of wine, this is as good a spot as any.

Another nice break is Valzani (map), a pasticceria that’s filled with chocolate eggs come Easter time. I previously wrote a post about this place, back when we lived around the corner. Pop inside and enjoy a meringue with whip cream.

Although I’m a Baffeto’s fan to a fault, there’s some phenomenal pizza in Trastevere. Highest on my list is Pizzeria Ai Marmi right on Viale Trastevere. Like Baffeto’s it’s Roman-style, not Neapolitan, which suits my bias fine. The wood-fired pizza is top-notch, and they do wonderful fresh suppli al telefono and zucchini flowers, which you can’t get at Baffeto’s. If you haven’t had them before, suppli are deep-fried balls of rice (cooked somewhat risotto-style) wrapped around a cheese center. They’re definitely worth a try; the ‘al telefono’ bit refers to how the melted cheese in the center is liable to pull itself into a long, thin string as you try and break off a piece, like a telephpone wire. You can also get zucchini flowers as a deep-fried cheesy appetizer, or as a pizza topping — either way, you win.

If you’re looking for more variety, try the reputable Ivo, Pizzeria San Calisto, orDar Poeta — they’re all in Trastevere. You’re not going to go wrong with any of these.

Il Gelato di San Crispino is hands-down the best gelato in Rome. Absolute purists, they’re written up pretty much everywhere, and this decade-old NY Times review explains why. I’m partial to a triptych of whiskey, bourbon vanilla and licorice, though on a hot day the fruit sorbetti are near-impossible to beat. Try the pear.

Not quite sure what would bring the average tourist to this area, but I reckon lunch outside Cacio e Pepe is reason enough. Again, what we have here is a restaurant that knows what it does best — namely, pasta with pecorino cheese (cacio) and pepper (pepe). There’s more to the menu, though I frankly never saw much reason to stray from the eponymous entree, save for the variant of cacio, pepe, and pancetta. Yum.

P.S. I’m going to add to this if other restaurants come to mind, but should you be hunting for more expat recommendations, check out the far more comprehensive Beehive’s guide, written by our friends Steve and Linda. (Say hi if you stay there!) 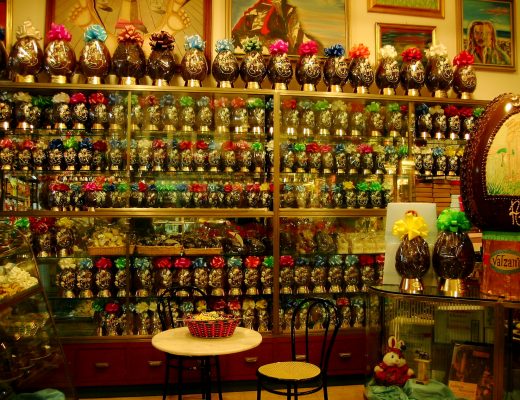 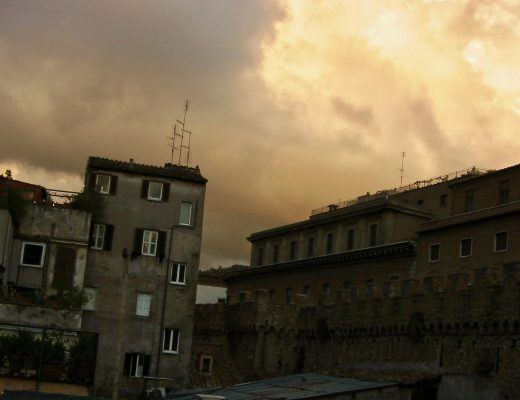 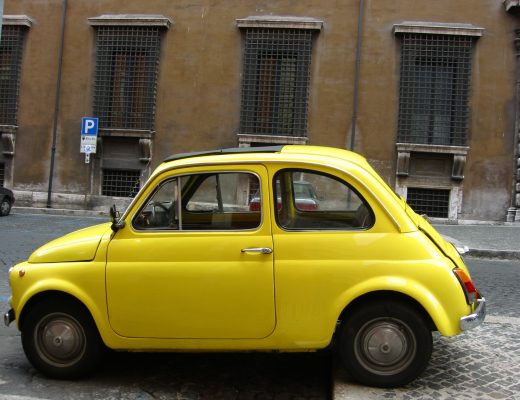